Kravall. The game is an RTS simulator where the player controls police force units to deal with a significantly larger crowd in difference scenarios. The game is planned to feature rich low level simulation of individuals in large crowds.

We're a group consisting of 11 artists and programmers. I'm a technical lead, I was responsible for designing and implementing some of the lower level system such as the entity-component framework and Lua bridge interface. 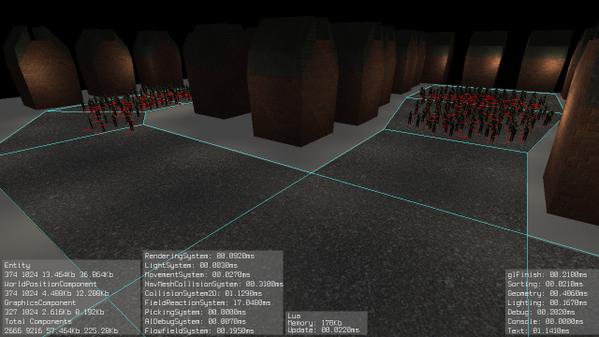 Bongout is a school project where we were a team of six people (Kim Restad being one of them) working on a two player breakout game over the course of roughly 2 months. It's developed on Debian and Windows 7 using OpenGL, glm, Open Input System, Lua and portaudio.

The summer of 2012 was dedicated to making a real game in collaboration with my old friend Lukas Orsvärn; who dedicated himself to Level Design, visuals and animation, and Cilia who has acted as a heavy influence in the game design.

Semest is, and is intended to become a 3D platformer, inspired by titles such as Mario and Banjo Kazooie. The game has one major aspect that changes the circumstances for the gameplay which is the large ball and chain attached to the main characters (semest's) waist.

Another school project. Over the duration of 8 weeks, half-time (20 hour weeks) we were given the assignment to create a spiritual successor for the classic pacman game. The team consisted of 5 members. The course was mainly focused on planning and design.

This game was made by the same team as cocos-island. We're using FMOD, OpenGL, glm, SDL and assimp additionally we used SVN for revision control and Redmine for project tracking.

Diamond is a 2 man 3d-programming project made as a part of a course in 3D programming.

Diamond features Deferred rendering (with different types of lights), heightmaps, particles, fog, linear splines, culling of a quad tree and some other bits and pieces.

Cocos Island is a five-man eight week project. Developed using OpenGL, SDL and assimp. In it you're stuck on an island in a desperate hunt for treasure. Time moves quickly, so the need for food and water will be very apparent and not to be neglected as it'll have dire consequences. You and your friends will have to coordinate to scavenge the island for food and gold as well as sticks for the signaling fire before the last ship passes the island.

Following is a video showing four people play testing the game via the internet.

During the autum of 2010 i took a course in XNA, the following games are creations that spawned during that period.

Most of the following games have a download link. They are installers created using Visual Studios publish tool and are supposed to be burned onto cd's. To install a game, simply unzip and start the setup, everything should be installed and running correctly without much work.

I cannot guarantee that anything will work as intended on your machine though, thus i cannot take any responsibility for any damages caused directly or indirectly.

Ba-Zuma is a Puzz-Loop clone where the objective is to prevent a series of balls from reaching the end of a track by destroying them. Most of the visuals were created by Cilia.

In the course we were given a Spline library (with no given license) and the font used for the score counter is made by Blambot the license allows me to use it for free if i'm creating a comic, it says nothing about free games of any kind, but i hope this can be considered fair use.

Sidewoller is a sidescroller utilizing pixel perfect collision and has a tile-based world editor. Some (anything that is worth seeing) of the visuals were created by Cilia.

A breakout clone with power-ups, different kind of bricks and particles! Also has an built-in editor for peoples map-making needs.

Whack is a whack-a-mole like game where the goal is to kill as many rabbits as possible within a set amount of time. Most visuals where given with the assignment and all copyright is due to their respective creators.